The number of blades on a wind turbine is a compromise. Each blade disturbs the air for the following blade, so ideally you want as few blades as possible to maximize efficiency.

If you've ever had the chance to watch a wind turbine start, you would have noticed that the blades start rotating very slowly and then begin accelerating faster and faster. This is because of the aerodynamic design of the blades. The more blades there are on a wind turbine, the higher will be the torque (the force that creates rotation) and the slower the rotational speed (because of the increased drag caused by wind flow resistance). But turbines used for generating electricity need to operate at high speeds, and actually don't need much torque. So, the fewer the number of blades, the better suited the system is for producing power.
ONE BLADED TURBINE :
Theoretically, a one-bladed turbine is the most aerodynamically efficient configuration. However, it is not very practical because of stability problems.
TWO BLADED TURBINE :
Turbines with two blades offer the next best design, but are affected by a wobbling phenomenon similar to gyroscopic precession.(gyroscopic precession is the phenomenon in which the axis of a spinning object describes a cone in space when an external torque is applied to it.) 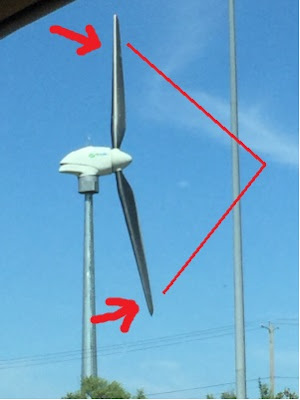 Also in case of 2 bladed turbine,since a wind turbine must always face into the wind, the blades will have to change their direction vertically when there is a shift in wind direction.2 bladed turbine will become completely vertical and completely horizontal once in a rotation.This will result in vibrations.
THREE BLADED TURBINE :
On the other hand, a turbine with three blades has very little vibration or chatter. This is because when one blade is in the horizontal position, its resistance to the yaw force is counter-balanced by the two other blades. So, a three-bladed turbine represents the best combination of high rotational speed and minimum stress.

The more blades you add to the system, the more the cost of producing it. This may seem obvious, but every pound counts when you are trying to produce energy from a turbine, and going to a 4 turbine system is going to cost more to produce.
You must log in or register to reply here.
Share:
Facebook Twitter Reddit Pinterest Tumblr WhatsApp Email Link
Top