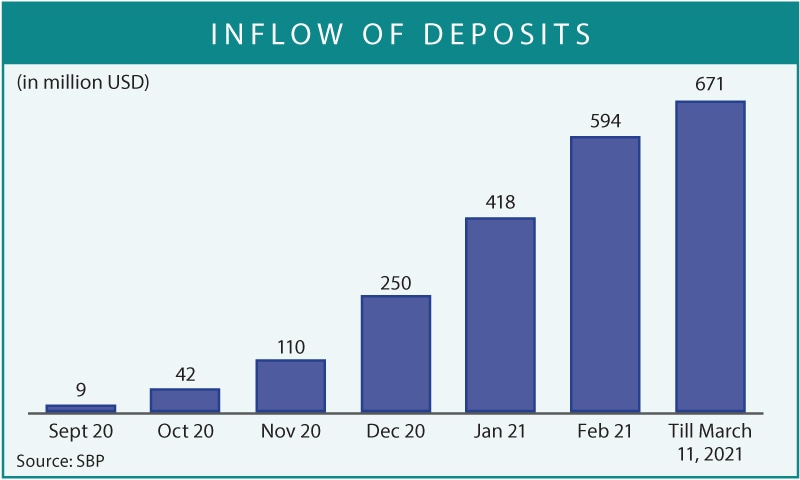 • 100,000 accounts opened by overseas Pakistanis from over 100 countries
• Half of total deposits came over the last eight weeks
KARACHI: The Roshan Digital Account (RDA) launched in September last year has crossed 100,000 accounts and attracted $671 million, the State Bank of Pakistan said in a tweet on Friday.
According to the SBP, the accounts have been opened by overseas Pakistanis from over 100 countries, indicating the increasing reach of the RDA and helping the government and the central bank improve the external account of the country.
The Roshan Digital Account, inaugurated by Prime Minister Imran Khan on Sept 10, 2020, was a joint effort of the SBP and the federal government in collaboration with commercial banks operating in Pakistan.

The main purpose of the RDA is to attract millions of Pakistanis living abroad by offering much higher returns on deposits than those in developed economies.
The State Bank said that half of the total deposits of $671m came over the last eight weeks, reflecting the growing interest of overseas Pakistanis.
The RDA was launched for non-resident Pakistanis (NRPs) to enable them to remotely open bank accounts in Pakistan through online digital portals without physically visiting branches. The NRPs can now avail digital banking facilities, including access to online banking, domestic funds transfer, utility bills and tuition fee payment in Pakistan, as well as investments in government bills, stock exchange and real estate with an option of full repatriation.
The RDA was launched in coordination with eight commercial banks, but later a number of banks have joined the initiative as, according to bankers, it offers diversified products and fields for investment.
In order to attract more investment, the State Bank has also launched a savings scheme — Naya Pakistan Certificate — offering significantly higher interest rates, compared to those prevailing in most of the developed and developing economies. Buyers can own the certificate in the US dollar with the highest interest rate of seven per cent and in the local currency with 11pc per annum provided the investment is made for five years.
The bankers said that most of the investments were coming to the country in Naya Pakistan Certificate, but the State Bank was yet to provide data about it.
Banks offer both Islamic and conventional accounts in various eligible currencies (not just US dollar) as per relevant rules and regulations of the SBP.
Overseas Pakistanis have been providing a large amount of foreign exchange in terms of remittances and now the RDA has attracted $671m. At the same time, long-term domestic Pakistan Investment Bonds attracted $150m foreign investment over the past four months.
The bankers said the country could receive up to $1 billion through the RDA by end of the current fiscal year if the inflow continued at the current pace. With the current account surplus and a 24pc increase in remittances, the country’s external account looks positive, which would encourage overseas Pakistanis to open accounts and invest in Naya Pakistan Certificate, said the bankers.
Z

It's good for Pakistan.
Z

Our Mission is to build the Country.
W