powerful hallucinogenic drug known for its part in shamanic rituals is being trialled as a potential cure for depression for the first time.
Participants will be given the drug DMT, followed by talking therapy.
It is hoped this could offer an alternative for the significant number of people who don't respond to conventional pills for depression.
Psychedelic-assisted therapy might offer longer-term relief from symptoms, some researchers believe.
A growing body of evidence indicates other psychedelic drugs, particularly alongside talking therapy, are safe and can be effective for treating a range of mental illnesses.
This will be the first time DMT is given to people with moderate to severe depression in a clinical trial.

Carol Routledge, the chief scientific officer of Small Pharma, the company running the trial said: "We believe the impact will be almost immediate, and longer lasting than conventional antidepressants." 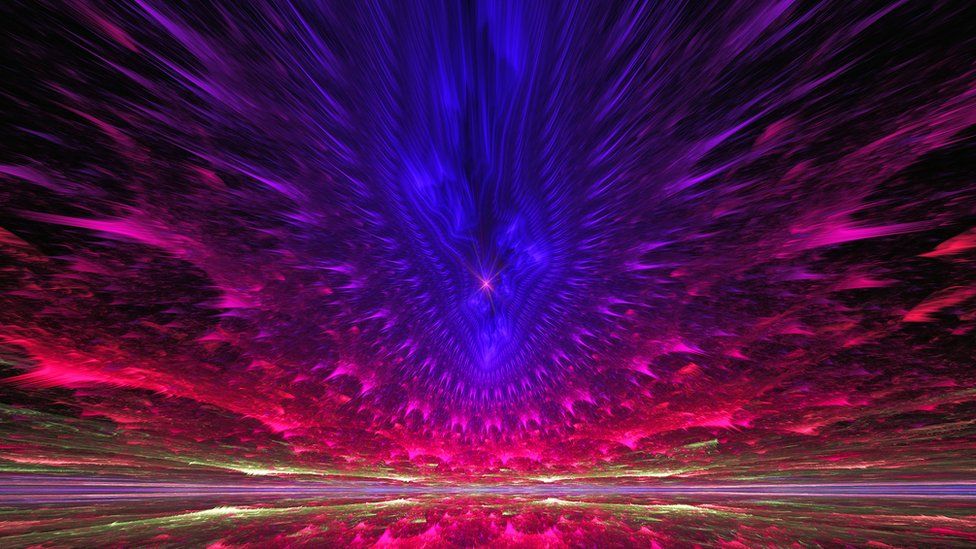 'Spirit molecule'
The drug is known as the "spirit molecule" because of the way it alters the human consciousness and produces hallucinations that have been likened to a near-death experience.
It is also the active ingredient in ayahuasca, a traditional Amazonian plant medicine used to bring spiritual enlightenment.
Researchers believe the drug might help loosen the brain's fixed pathways, which can then be "reset" with talking therapy afterwards.
Ms Routledge likened the drug to "shaking a snow globe" - throwing entrenched negative thought patterns up in the air which the therapy allows to be resettled into a more functional form.
But this hypothesis still needs to be proven.

The team is consulting Imperial College London, which runs the pioneering Centre for Psychedelic Research.
As part of the study, they hope to investigate whether the drug can be administered as a one-off or as part of a course.
Subjects will be followed up for at least six months to see how long the effects of the treatment last.
Ketamine clinic
Meanwhile, a ketamine-assisted therapy clinic is set to open in Bristol next week.
While the drug is already used for depression in clinics like the ketamine treatment service in Oxford, it is not accompanied by psychotherapy.
Rather, it is used to provide temporary relief from symptoms for people who have very serious, treatment-resistant depression.

So-far unpublished researched presented at a conference by professor of psychopharmacology at the University of Exeter, Celia Morgan, suggests ketamine accompanied by therapy has much longer-lasting effects.
Prof Morgan said there was mounting evidence that drugs, including psilocybin, LSD, ketamine and MDMA (Ecstasy), were safe and could play a role in the treatment of mental health disorders.
And there was some early evidence they could have longer-term effects than the medicines conventionally prescribed as antidepressants, known as SSRIs, but more research was needed.
They also worked using a completely different mechanism, Prof Morgan explained.
'Long-lasting change'
While conventional drugs may numb negative feelings, "these drugs seem to allow you to approach difficult experiences in your life, sit with that distress and process them," she said.
"It might be getting at something more fundamental" that was the root cause of the problem, Prof Morgan said.
"Through that we think you can get much more long-lasting change."
Prof Michael Bloomfield, a consultant psychiatrist at University College London, said although it was a "really exciting" area of research, caution was needed in overpromising the drugs' potential.
It was also a field of therapy that could be open to abuse and misuse, he said.
Prof Morgan also stressed the importance the drugs being used within the context of therapy as there were concerns that "people might think they can give it a go with some recreational drugs".
"But it's really not how it works" she said.
H

When you are removed from nature you are being depressed. Just drop all the identification and spend sometimes in nature.
I

All sorts of people have trialled many hallucinogenics over the years with excellent effect... but your dearly beloved overlords wrote laws saying they were criminals for doing so.

As someone who has used DMT in hopes for it to “cure” my depression, it didn’t work. All it did was force me to let go of situations that held me back in life. Sure I felt elevated for a good hour after, but I went back to being depressed. I’m glad that trials are being done, though, so that it may help others.
I

So, to escape the misery of the modern world and our unfulfilled lives, we must dope ourselves into confusion and stupor? Please... how about exercising or reading a book instead of taking psychoactive drugs that’ll make you go insane.
J

A bit of distortion of reality as an escape from it is fine.
But then there might be a problem of then becoming dependant on it.
If it's to help take the edge off then ok. But I'd think there's a danger of it becoming equally as debilitating as the depression itself.
Plus of course, if you have anxiety as well and it sets you off on a bad trip.
I guess each to their own- it might help some, might make things worse for others.
To say it's a cure? I'm not sure I'd call it that exactly.
But that's just my opinion.
M

Depressed people actually might not be "sick". It's about time society started to face up to this reality. People don't always respond to drugs and therapies because they're NOT mentally ill, and saying they are is only disguising the real, wider societal issues that are making people miserable.

It's only modern society that chastised psychedelics. Natures way of communicating its lessons to us directly, and we choose to block it out through sheer ignorance and delusions of grandeur.
W

Please don’t knock it till you’ve tried it. There’s a reason this has been used for thousands of years to help people. The magical properties and effects are out of this world and enable people to re-connect with the source, which greatly impacts their well-being.
Z

I think psychedelic therapy is good when monitored by a doctor or healer who understands your mental illness and chemical imbalance. People mistake this for it being okay to abuse psychedelics or use it many times recreationally as "self-therapy". I know someone who had bipolar disorder, which literally transformed into schizophrenia from abuse of these drugs. I believe this treatment can help treat patients, but please do not take it as okay to abuse and over-use these drugs as therapy.
W

So basically the same idea as LSD - as it’ll be a lot cheaper than providing a therapist to work on causes & coping mechanisms, I’m sure it’ll be trendy.
Z

Finding solutions for the cause of depression is a better idea; many of us know why we are depressed, but for various reasons (financial, past life choices), we cannot change the situation. No amount of happy pills or getting off your head on drugs is going to change that. I'd rather keep the sharpness and clarity of my brain intact thankyou!
T

Lots of things can. 25-years of traumatic life events, crying every day for a week, 25-years of marijuana use, tons of coffee and late nights can burn-out your ability to have strong emotions or depression.
U

If it starts in the gut and immune system do these drugs help regulate those?
It sounds good for PTSD.
S

We are turning into a society of neurotics; awareness of mental health is vital and proper: but we are drowning in it. Proper exercise, hard work, good food and decent relationships are the foundations of 'mental health'. Meditation, awareness of OTHERS, appreciation for the 'little' things are very helpful.
S

Well, as someone who has suffered from depression, I'm not sure sitting there watching the furniture melt and talking to a purple giraffe called Dave would have helped, but it sure as heck would have made life more interesting.
S

Amazing drugs banned by governments that don't want years of brain washing to be undone yet can be a saviour for millions that use it for a purpose other than getting off their heads.
S

Mother nature has a natural remedy for all ailments, she's had millinea after millenia to do so.
R

Seems to be good.
W