Indian Prime Minister Narendra Modi has told Prime Minister Imran Khan in a Pakistan Day message that his country desires cordial relations with the Pakistani people, it emerged on Tuesday.
The message, dated March 22, was conveyed to Prime Minister Imran by the Indian High Commission in Islamabad through the Foreign Office.
In his letter, Modi extended greetings to the people of Pakistan on the occasion of Pakistan Day, which is being celebrated across the country today.
Hawks must be sidelined so a conducive atmosphere is created for dialogue between India and Pakistan

"As a neighbouring country, India desires cordial relations with the people of Pakistan," Modi wrote. "For this, an environment of trust, devoid of terror and hostility, is imperative." 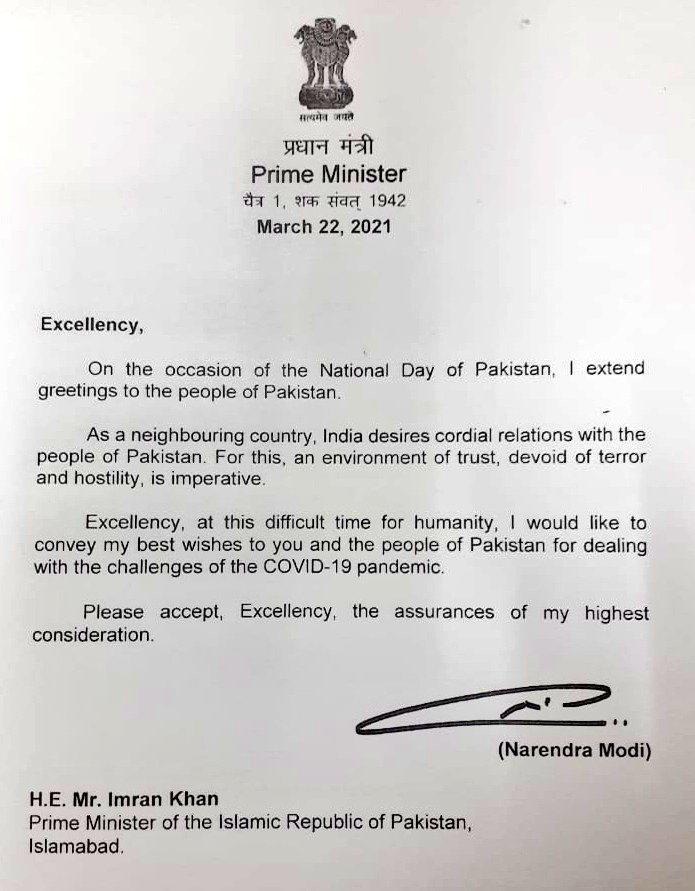 The Indian premier also conveyed wishes to Imran and the Pakistani people for dealing with the challenges of the coronavirus pandemic, terming it a "difficult time for humanity".
"Please accept, Excellency, the assurances of my highest consideration," the message concluded.
The development comes days after Prime Minister Imran said India would have to make the first move to normalise ties with Pakistan.
“We are trying, but India would have to take the first step and unless it does that we cannot move ahead,” the premier said while inaugurating the first edition of the Islamabad Security Dialogue.
The perpetually tense relations between the two countries, which have fought three wars, besides engaging in several episodes of limited conflict, suffered a breakdown after India illegally annexed occupied Jammu and Kashmir on August 5, 2019.
However, the two countries sprung a surprise last month by announcing the resumption of ceasefire at the Line of Control (LoC) after a ‘hotline contact’ between the directors-general of military operations of the two countries. Many believe that agreement was made possible through a backchannel, although Pakistani officials strongly deny it.
No violation has since then been reported at the LoC and importantly there has been a visible reduction in rhetoric from both sides.
In his speech at the Islamabad dialogue, Prime Minister Imran said the Kashmir issue was the lone irritant standing in the way of better relations between Pakistan and India.
While addressing the same event, Army Chief Gen Qamar Javed Bajwa too stressed the need to resolve the Kashmir dispute through peaceful means, saying: "We feel it is time to bury the past and move forward."
U

Modi is trying hard to galvanize his criminal past . History witness, all criminals end up in international criminal court and therefore in jail. Modi has the same fate. Ameen!
Z

Narendra Modi has told Prime Minister Imran Khan in a Pakistan Day message that his country's people desire cordial relations with their Pakistani counterparts but fell short of including himself. Let us hope it was an unintended scripting mistake.
S

Frankly speaking, I do not trust Modi. In my view, he is playing a double game, because, his evil policies have been exposed and failed in occupied Jummu and Kashmir along with over six months old 'Farmers' unilateral laws that he introduced. I'm sure, both our government and army are aware of Modi's double face and dubious tacts and will take all measures wisely. Remember, leapord doesn't change his spots.
S