The widow of Kobe Bryant has published the names of Los Angeles County police officers who she said shared graphic photos of the scene of her husband's death in a helicopter crash last year.
Vanessa Bryant is suing the Los Angeles County Sheriff's Department for negligence and invasion of privacy.
"We will refrain from trying this case in the media," the sheriff said in response.
Basketball star Bryant died with his daughter and seven others in the crash.
On Wednesday Vanessa Bryant, 38, posted on Instagram the names of four sheriff's deputies.
She says they took graphic pictures of the nine people who died in the crash close to Calabasas, California, in January last year.
She alleges that one of the officers shared with the bartender photos of Kobe Bryant's body and the others distributed "gratuitous photos of the dead children, parents, and coaches".
The Los Angeles Times newspaper reported in February last year that an internal police investigation found officers shared photos of victims' remains.
She claims the pictures, including those of her 13-year-old daughter Gianna, were taken and shared "for no reason other than morbid gossip".
Last week a judge rejected an attempt to stop publication of the officer's names, allowing Bryant to disclose them.
LA County Sheriff Alex Villanueva responded on Twitter to Bryant's post, saying that the department would wait for a court to decide the outcome of the case.

Bryant alleges that at least eight officers took pictures of the crash site for their personal use, and claims that one took between 25 and 100 photos.
In February safety investigators said the helicopter pilot, Ara Zobayan, may have become disoriented in fog before the aircraft smashed into a hillside. 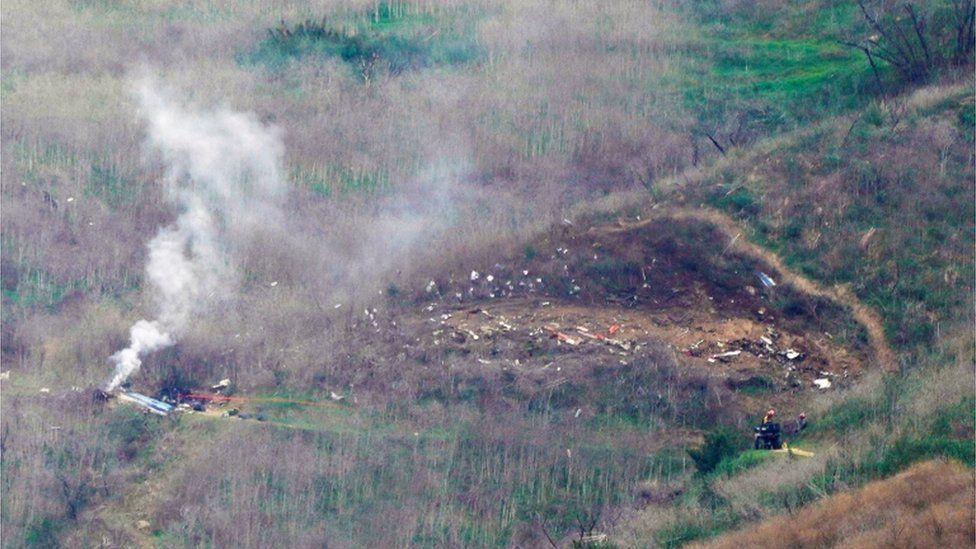 An investigation found the pilot in the helicopter crash had probably become disoriented
The US National Transportation Safety Board said the main cause of the crash was most likely the pilot's decision to keep flying in inclement conditions "which resulted in the pilot's spatial disorientation and loss of control".
As well as Bryant, his daughter and the pilot, those killed included two of Gianna's basketball teammates, their relatives and a coach. The group were on their way to a tournament in Thousand Oaks where Bryant had been set to coach.
The fatal crash prompted a global outpouring of support for the NBA star and his family as well as a number of lawsuits.
Mrs Bryant has also sued the estate of the pilot, Mr Zobayan, and the companies that owned and operated the helicopter for alleged negligence and wrongful death. Families of the other victims sued the helicopter companies, but not Mr Zobayan's estate.
California now has a state law prohibiting first responders from taking unauthorised pictures of people who died at the scene of an accident or crime.

I agree, sue those officers as they need to be held accountable. But why go after the pilots estate. Even if he was partially responsible he’s gone and his family wasn’t responsible. Why sue a grieving family for any livelihood that might have gotten in life insurance when you have millions. Sad.
M

Dignity is so very important in death. And I doubt that they would have been so motivated to take photos had this just been an accident with no celebrities.
R

Do it! Come for their necks! This woman is worth hundreds of millions of dollars. She doesn’t care about the tiny coins she may or may not get from this. The people that did this are grossly entitled and downright sick. They need to learn to exercise some discretion.
F

I don't blame her Chesters wife should sue them too cos someone has leaked pictures of Chester hanging in their home I came across one accidently and if I can do that so can his kids and other fans it's so upsetting they have no right to do this crime scene photos are for the purpose of the investigation not to be viewed by the world and its the same with the crash site it's not for public viewing, disgusting behaviour her husband and daughter died in that crash she doesn't need a visual reminder of it she'll never get the image out of her head now my thoughts are with her and her family
A

Those who are saying she did it because of money, y'all need to get a life!! Just shows how the world lacks integrity.People just wanna profit off in anything.The world is waking up to the lies and illusion of bad minds.The police are supposed to protect and serve not take pictures with their personal phones!!
You must log in or register to reply here.
Share:
Facebook Twitter Reddit Pinterest Tumblr WhatsApp Email Link
Top